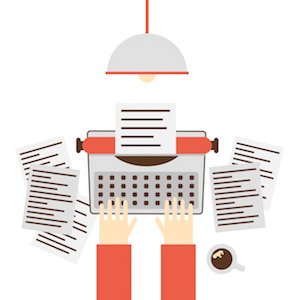 One of my pet peeves is writers who don’t try. Some writers just think that it’s just enough to get words on a page, but it really isn’t.

How well somebody writes is subjective, of course, but when it comes to online content, unless you make your writing engaging from the outset, you don’t stand much of a chance of anybody sticking around long enough to make a fair judgement.

That said, if the writing is drab from the get-go, perhaps it is a ‘fair judgement’?

Content writers don’t have it easy – that much is clear. Not only are we battling with huge amounts of competition, we’re grappling with dwindling attention spans, which has seen the written word binned in favour of visuals.

However, I like to believe that if you’re prepared to inject your writing with tons of personality, you’ll reap the rewards. The Content Marketing Institute is of the same opinion and has offered up ten tips to improve the quality of your writing:

Anecdotes make for great reading/listening. TV chat shows like those hosted by Graham Norton and Jonathan Ross revolve around their guests’ anecdotes. While ours are likely to be a little less star studded, they should still grab the attention of your readers. Just don’t overdo them.

2. Appeal to your readers’ emotions

I watch plenty of films and one thing I’ve learnt as a general movie-goer is that it’s easy to overlook a movie’s faults if it makes you feel something. Emotions are incredibly powerful and if you’re able to prod them in the right ways, your piece of writing could live long in the memory, even if some readers disagree with the points made.

Rhetorical questions engage your audience to think – that’s why they’re used so often by some of the best public speakers. Give them a little room to breathe to really get the reader to process what it is you’re asking them.

4. Format the look and flow

There’s no bigger turn-off for a reader than a chunk of text that has been given little thought about how it is presented. It doesn’t take much to throw in a few bullet points, emphasise the headers – that sort of thing – but it can make a huge difference in the mind of the reader.

It’s my personal opinion that every writer should have a good book on the go at all times. Reading other people’s writing will improve your own writing, even if you don’t realise it. You may even been inspired to write about something new and interesting that nobody else has covered yet, or use words that go beyond what people hear in their everyday life, thus giving your writing something of an edge.

6. Be passionate about what you’re writing about

We’ve all had to write about something uninspiring. Unless you go the effort of making the topic interesting and relevant to you, likelihood is the piece would’ve reflected your lack of enthusiasm. Find a way of making the subject matter intriguing, even if that involves a bit of procrastinating.

Every morning I’ll head straight to the Guardian website to see which stories and features take my fancy. The Guardian is something of a well of great content that rarely fails to act as pause for thought, while also introducing me to new and exciting writers that can act as inspiration.

Stats and facts cut through any fluff and help the reader get a clear sense for what you’re trying to say. It’s for that reason they prove so popular in online content – that and them being supremely share-friendly on social media.

Here’s something of an admission: When I first started writing, I would often try and sound too clever for my own good. I quickly learned that it was much more effective to write as I would speak. It meant that I didn’t trip over myself in my writing and saw me take on a voice that only I could adopt: my own.

While I don’t think I’d get away with creating a sense of suspense in this piece, if you’re writing a story or other piece of content that has a beginning, middle and end, do what all good authors do: keep your readers guessing.

However, it’s important to remember that engaging readers is as much about taking the time to interact with them on social media as it writing fantastic copy. If you’re not prepared to follow-up their comments and questions, you might as well have not written the piece in the first place, in all honesty…