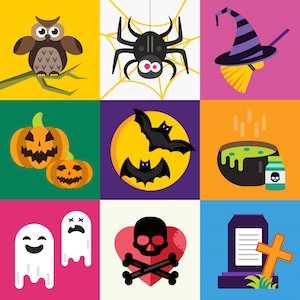 Compared to the U.S., we’re pretty conservative with our Halloween celebrations. Over here we see it as more of an event for children, whereas across the Atlantic you’d be just as likely to see an adult dressed up come October 31 as you would little ones.

Regardless of our down-playing of Halloween here in the UK, however, it represents an opportunity for brands to get extra creative with their marketing efforts, in an attempt to capture the imaginations of their audience.

After all, Halloween relies upon imagination, meaning firms have free reign to be out as “out there” with their content as they see fit – that’s surely a chance you can’t afford to pass up.

It’s safe to say we’ll be indulging in some Halloween-themed content in the run-up to Saturday. We start off by looking at what content marketing principles can be gleaned from horror movies (it’s not as spurious as you’d think), as identified by Sales Force.

Let the Right One In

This scary and romantic Swedish vampire film is arguably one of the most enduring horror movies to have been made in recently years. Based on the book by John Ajvide Lindqvist, it resonated with filmgoers across the world. What did it teach us? If you want your content to find an audience in other parts of the world, pare your story down to its simplest form, remembering to remove any cultural nuances that may confuse certain regions.

Cabin in the Woods

The horror-comedy genre isn’t exactly littered with critically acclaimed films; perhaps because it’s tricky to keep audiences immersed in the horror with a funny script as a distraction. However, Cabin in the Woods is the exception, with the funny moments serving to make the next big scare even scarier. It’s proof that employing some humour as light relief can help your audience stay engaged for the duration of your content – all the way through to the call to action.

Largely regarded today as one of the best films of all time, you might be surprised to learn The Shining wasn’t an instant hit. It didn’t receive a single Oscar nomination in the year of its release. However, it did receive two Razzie nominations – the award ceremony in recognition of the worst film. It just goes to show, some content – even the best – can take a while to get the recognition it deserves. However, if you’re patient with it, the pay-off might be greater than anything you could have imagined.

A Nightmare on Elm Street

Content doesn’t have to be expensive in order to win over your audience. In fact, sometimes it’s the simplest and most authentic ideas that resonate best with readers. A Nightmare on Elm Street went on to gross over $26 million dollars in the 12 months after its release in 1984 – not bad for a movie that was made for $1.8 million. Compare that with the 2013 Keanu Reeves movie 47 Ronin, which had a production budget of $225 million, only to make an estimated loss of around $150 million. Bigger doesn’t always mean better.

We’re big advocates of real-life examples here at M2 Bespoke, as they put the reader at the centre of the piece allowing them to truly relate to what they’re absorbing. Creating such content is fairly inexpensive too – in terms of both time and money – as the customer relaying their experience is doing most of the legwork. It’s a formula which worked wonders for 1998 Japanese movie Ringu, which would later be remade in America under the English title The Ring. What made the movies so scary? They were based around objects found in everyone’s home: TVs and VHS tapes. Some viewers couldn’t look at the two objects the same ever again – that indelible impact is something to be admired.

There are plenty of other examples of horror movies that inadvertently provide content marketing wisdom. What can you come up with?