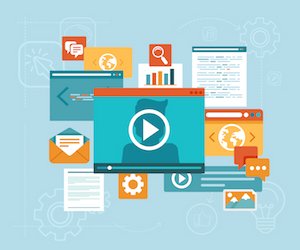 First things first, let’s define the two approaches. Content creation is when a company pours a significant amount of its time into creating original content, which is reflective of the author (the firm itself) and seeks to add value to their audience.

Content curation, meanwhile, consists of sharing external content, although the objectives are largely the same: to inform and advise customers, but this time it is done by directing them to other people’s content.

Without wishing to state the obvious, it doesn’t take half as much time and money to curate content as it does create content, which is where the debate rages. Are businesses better off just curating content, rather than labour over creating their own content?

Here are the arguments for each approach:

In favour of curation

By curating a stream of interesting and industry-relevant content, a business shows itself to be engaged and aware of developments in its sector, which will do plenty for the company’s credibility among its target audience. All it needs to do is identify something already in the public eye and maybe – although not essential – put its own spin on it, before sharing it with its audience.

It allows those budget-tight businesses who can’t stretch to a full-blown content marketing campaign to build a presence on social media, even if what they’re sharing isn’t their own work. We all know how hard it is to produce original content all the time – plus there’s so much competition these days.

The curated content will (hopefully) be genuinely useful to your target audience and not just be acting as a platform for your marketing messages, which firms are still sometimes guilty of when they create their own content.

All the while, those individuals and groups whose content you are sharing will likely be grateful for you taking the time to push out their content via your social media profiles. It might even be the makings of a long-term relationship which yields into them sharing your posts, even if you haven’t got any long-form content of your own to share.

Maybe, then, content curation makes for a sensible first phase of your content marketing strategy? It allows you to build a number of fulfilling relationships with influential groups and individuals, simply by sharing their content with your audience.

At the same time, you’ll be getting kudos from your target audience for filling their timelines with interesting and problem-solving content that they wouldn’t have otherwise found. That seems to be the key here. The content must be relevant but different; a little off-the-radar. If you’re just re-sharing all the same content as everybody else, however, your customers will wonder why they bother to follow you.

In favour of creation

The same applies to creating content. You’ve gone to make sure that the content that your company creates is unique and doesn’t overlap too much with other firms, otherwise you’ll suffer the same problems as those accounts who curate tired, old content.

You might be asking yourself, “Yeah, but aren’t you re-hashing an old argument?” and it’d be a fair question. However, we think that we have made a bit of a breakthrough in the debate, in that we believe both curation and creation have their place in a content marketing campaign.

As we suggested earlier in the piece, curation works well as a means to build up an initial following and to form relationships with leading voices in your industry.

The second phase of your strategy involves creating your own original content which shows you to not just be a messenger, but a voice in your own right. Sure, you’ll gain some credibility from curating fascinating content, but it will be nothing like the trust you’ll gain from creating content that is good enough that other curators will want to re-share it.

On that note, wouldn’t you much rather get recognition for creating something that is all your own work? It’s partly for that reason that the likes of Netflix and Amazon have started creating their own original movies and TV shows in the last couple of years. They know that people are much more likely to buy into the service if they can offer something other content providers can’t.

Like most debates, there are solid arguments for both approaches. However, we are of the opinion that the curation vs content debate is pretty redundant nowadays. By that we’re saying that businesses should be both creating and curating as part of their content marketing strategy.

While we’ve suggested that content curation makes for an ideal entry point into content marketing, that’s not to say you stop sharing other people’s content when you feel like you’ve got to a point where you have enough budget and time to start creating your own unique content.

It’s still so important that you take the time to see what other content is out there that would be of interest to your audience, even if your focus has shifted to your own creativity.

Curated content helps to ensure you’re feeding your customers with enough content, and shows that you remain active and switched on, even when you’re not posting content of your own making. It also helps to maintain existing relationships with influencers and build new ones.

Content creation, though, provides you an opportunity to carve out your own voice. It’s for that reason that some believe that without creation, curation is empty.

That’s a criticism revered film director Ben Wheatley levelled at movie critics recently. Speaking about the profession, he said: “It’s a job that I wouldn’t want or seek out. As a creative person, I think you should be making stuff. That’s the challenge. Talking about other people’s stuff is weird. Why aren’t you making stuff? And if you aren’t, why should you really have a voice to complain about things until you’ve walked mile in someone’s shoes?”

The same criticism could be sent in the direction of brands who don’t create their own content. If they’re not prepared to put themselves out there with their own content, they can’t expect to carve out a legitimate voice within their industry.