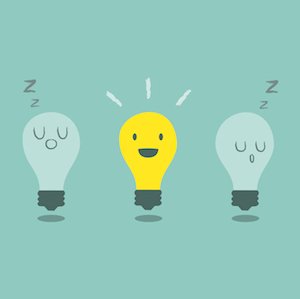 Is there a more insulting put-down than being called boring? As a writer, if you fail to convince your readers you have an interesting point to make, they will simply stop giving you the time of day.

In content marketing, then, it’s unforgivable to produce dreary articles that do nothing for your target audience.

However, while it might be terribly distressing to have the b-word levelled at you, the good news is that you have the power to prove people wrong, or at least turn their opinions around. .

Just look at Arianna Huffington, who was so “boring” she managed to make US$315 million from selling The Huffington Post, having been its primary founder. Perhaps Bennett’s remarks acted as an incentive – although she wasn’t exactly an unknown prior to creating HuffPo.

Anyway, back to blog writing. How can we ensure our posts are keeping readers’ attention? HubSpot offers up a few tips:

1. Write in the first person

When people talk about themselves in the third person they are often characterised as narcissistic, self-obsessed and detached from reality – US basketball star LeBron James being a prime example.

Why is that? Well, it’s just not natural to talk about yourself in the third person – it’s off-putting, if nothing else.

Writing is much the same. Your point will be taken more seriously if you use “I”, “I’ve” and “me” as opposed to “the author”. It’ll help keep things consistent too and allow you to find that winning tone of voice.

All good readers build up a sense of anticipation in the paragraphs before it all kicks off. Now, I’m not saying that you’re going to have readers on the edge of their seat with your content, but foreshadowing can act as a bit of direction, allowing readers to visualise where the article is headed.

By telling yourself you must use this particular literary device, it encourages creativity and stops you from giving away all of your good points in the first few paragraphs; we want our readers to make it all the way to the call-to-action, after all.

You may want to cover more than one topic in the space of a single article, but are wary that the reader might not appreciate the switch in subject. This is where transitions come into play.

Most writers will create a transition through visual clues, such as a sub-headline or headers tags, as there’s nothing more boring than being presented with block text, regardless how interesting the words are.

However, the more nuanced way to transition is by finding a way to seamlessly link your points together. I like the idea of building a theme around your article, or using quotes to create a link. Be as creative with your transitions as you can.

Creativity shouldn’t be at the expense of clarity, however. If you start to compromise on clarity, your readers will switch off from what you’re trying to tell them.

We’re forever being told that the internet has decreased people’s attention span, so rarely-seen words that require dictionary consultation might be enough for them to click away.

Content marketing is about providing your customers with useful and unique information, which sometimes means cutting out stuff that distracts. This might seem at odds with keeping things interesting, but trust me, trying too hard can be really tiresome for readers.

Too many writers these days are led by a word count. Sure, there’s some argument that giving yourself restrictions can breed creativity – quite often film directors will impose smaller budgets upon themselves for that reason – but there’s no shame if it comes in shorter than you first imagined it would.

How often do you hear the following comment made at a movie? “It was good, but it dragged on a bit.” The audience in this case has often paid for the privilege, but your readers will likely take some coercing to click-through to your post.

HubSpot contributor Neil Patel sums it up best: “Extra verbiage is boring. If you don’t need to say it, don’t.”