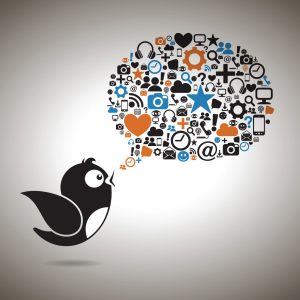 One in four brands on Twitter use it just to broadcast information rather than to try and engage users, according to recent results I was reading from Brandwatch.

Clearly, Twitter has become a more trusted channel over the past 12 months. Businesses are increasingly tweeting, as opposed to setting up a profile and just lurking in the shadows. Overall, 97.6% of all brands on Twitter are now publishing content – up from 90% last year. Some 69% of businesses use their accounts for both broadcasting and engagement purposes, the study shows.

A similar proportion, 63%, have multiple accounts on Twitter, with one typically designed to address customers´ needs and the other one for company announcements. Some businesses, however, have an astonishing number of accounts, with Dell being the champion. Can you guess how many accounts they have? 44.

According to Brandwatch, the most followed companies on the platform publish a new tweet every six to 20 minutes, but none of these actually made the list of the most engaged brands. Interestingly, UK businesses were found to tweet far less frequently than their US counterparts, with an average of 30 tweets per week, compared to 221 for brands across the pond. However, both US and UK brands had an average of four employees on their Twitter team, Brandwatch said.

Another interesting finding from the study revealed that tweets with images or video received three to four times higher engagement than plain text tweets.

Social media is growing year on year in terms of its importance for businesses. It is crucial that brands stay on top of their tweets and posts by producing relevant, share-worthy content. This will not only raise your profile, but also engage new and existing customers. However, generating content for your blog, news feed and social media is easier said than done. With the day-to-day running of a business, it is sometimes impossible to find the time. That´s where we come in. M2 Bespoke produce fresh, interesting and quality-written content for a variety of sectors. Imagine having peace of mind, knowing all your online content is being taken care of…

Give our friendly team a call today and find out how we can help.