Are You For Or Against The Listicle? 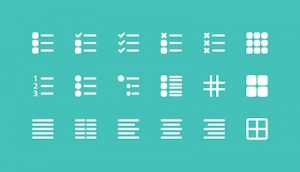 What is your opinion on the listicle? Are they something that you deploy in your content marketing strategy?

If you’re still a bit bemused as to what a listicle is, the good news is you’ll be able to look it up, with Oxford English Dictionary online having added the word to OxfordDictionaries.com last August.

Here’s the official definition: “An article on the internet presented in the form of a numbered or bullet-pointed list.”

However, that hasn’t stopped the listicle coming in for a fair bit of criticism, with some marketers of the belief that it represents the “dumbing down” of the internet.

It’s something that David Leonhardt recently addressed in a blog for the New York Times, in which he makes a case for the humble listicle, stressing that “big blocks of text aren’t the only good way to deliver information”.

He cites Aaron Carroll’s ‘Simple rules for health living’ as a great example of a piece of content that simply wouldn’t have generated as much engagement as it did without being in the more readable format. He might have a point, too, given that it has 547 comments sitting underneath it, to date.

Leonhardt, somewhat inadvertently, backs up his own point by only managing to generate nine comments for his article entitled ‘In Defense of the Listicle’, which is not in the list format.

Admittedly, however, the piece probably wouldn’t work in the list format, nor is the content as share-ready as Carroll’s piece.

Leonhardt acknowledges that listicles are an easy target for derision, but argues that they are no different from its counterparts – quotations, photographs, charts, statistics – that are also used to make information more digestible. The same case could be put forward for the infographic, too.

Meanwhile, others are less convinced they have a place online – mainly because they are seen as an inferior format that merely caters for the masses.

One such detractor is British technology and internet apps blog MakeUseOf, which, rather ironically, compiled its case against the layout in the form of, you guessed it, a list.

MakeUseOf goes one step further, however, claiming that listicles aren’t just too commonplace, but they are “bad for you”. Some might say that its reasoning on why it presents its argument in list form – “to help your brain out” – is undermining of its point, but we’ll let that ride for the time being.

Writer Ryan Dube takes the perspective of the reader, claiming that – amongst other things – listicles “do all the heavy lifting, so you don’t have to”. From a writer’s point of view, that sounds all well and good; in fact, it might represent meeting one of the aims of content writing. However, for the reader, consuming a listicle does not exercise the brain, which could lead to “earlier cognitive decline”, Dube suggests.

He then goes on to press the case that listicles don’t actually help you retain the information being offered. Not only that; because listicle writers are wary of keeping things bitesize, they only provide a “surface level overview of any topic”.

Dube uses McDonald’s as metaphor to illustrate his point, suggesting that a listicle is like eating a Big Mac, as opposed to cooking and eating a full and nutritious homemade meal.

Whilst I like the analogy, I’m not sure I’m fully behind it. That’s because Dube works off the assumption that there are some people out there that refuse to read anything that isn’t a listicle – or another text format similar in length.

I like to think that people are happy to consume a variety of content formats, dictated by any number of factors, such as where they are, what device they are using, complexity of content etc. For us content marketers, then, I think the listicle is here to stay – but just make sure that you don’t become over-reliant on it, and instead deploy the format only when the information necessitates it.

As one of the formats available in your content ‘toolkit’, the listicle can prove a very powerful article indeed.

Where do you stand on the listicle? Right format at the right time, or insulting to our intelligence?