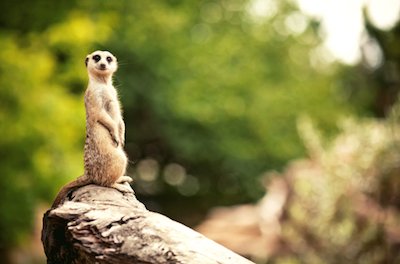 When we last looked, Marks and Spencer had nearly 140,000 tweets to its name. “And what?” I hear you ask. Well, it illustrates the time and resources brands are putting into their efforts on social media, to the point where you find yourself wondering if we´re still yet to see the true potential of the platform from a marketing perspective.

These thoughts on the future of social media marketing have only been intensified by talk of Meerkat. That´s right, the singular Meerkat – which, if predictions are to be believed, will become a word which will soon sit among Twitter, Instagram and Vine in the social media marketer´s lexicon.

In the UK, the meerkat has become symbolic of comparethemarket.com, following the success of its Compare the Meerkat campaign. However, the humble carnivoran is set to become figurative on a more global scale, with the Meerkat livestreaming app said to be gaining traction.

We went in search of a bit more information on this emerging app, with IGN proving to be a good place to start.

How does it work?

As it explains, Meerkat brings together the camera on your phone with your Twitter account, presenting your followers with a live feed of you, no less. Sounds all a bit ´The Truman Show´, doesn´t it? The difference here, of course, is that you´re in charge of what goes out live to your viewers – just don´t hit that “stream” button accidentally…

Without having chance to look at the app too closely yet, it´s safe to assume that, much like Twitter and Facebook, it´d be pretty difficult to stream something inadvertently. But, that´s not say there won´t be some hands-over-the-eyes moments should brands decide to sign up.

Will brands get involved?

It´s difficult to say at the minute, but the potential is there. Promotional events would no longer be confined to a guest list, for example, with all of a brand´s online target audience able to get in on the action.

“Behind the scenes” footage, too, could be utilised to a greater effect, with brands able to effectively transport customers into their world, thus encouraging the customer-brand relationship.

However, brands are known for taking something of a cautious approach to new technology and apps, allowing individuals to experiment first, and only joining once the technology has grown into – or proved – itself.

Initially, then, Meerkat is expected to expand the reach of citizen journalism, with users able to stream events happening around the world in real-time, before any form of private or governmental filters can get hold of it. This is pretty exciting in itself.

Well, yes. Twitter, for instance, recently purchased Periscope, a livestreaming video app that´s still in private beta. And YouTube, of course, already allows you to stream your event – “live and direct” – right to your audience.

Meerkat, however, seems to have stolen a march on its rivals, already boasting over 100,000 users – a figure that could climb in quick-time if more people like US TV chat show host Jimmy Fallon join the service.

There are even statistics already been bandied around regarding its users, with Meerkat´s CEO recently claiming that 20% of them watch two hours of video daily. Is there room for any more, though?

So, do you think the app will soon find its place alongside the Vines and Instagrams of this world? If so, does the platform play into the hands of brands looking to add value to their content marketing strategy?

What in the World is the Meerkat App?